Barnsdales FC compete in Pantera Property Charity 5 a side

In the fiercely contested Pantera Property 5 aside football tournament, Barnsdales FC narrowly missed out on the title, not making it past the group stage.

When interviewed, experienced goalkeeper and club captain, Craig Gooddy explained, ‘We started the tournament with the intent of performing better than  last time out and to give the fans something to shout about. Unfortunately we came up against a strong side in our first game but I feel we played much better as the tournament went on and the final game saw the hard work in training pay off and we got the win.’

The first game, saw the Barnsdales boys came up against the eventual runners up, Begbies Traynor. For the first half Barnsdales held their own before being overpowered in the second, losing 4-1.

The second game saw BFC take on Armstrong Watson. In a heated affair, the fans of BFC were furious with many of the decisions throughout the game. With questionable  refereeing and an opponent intent on deceiving the, already bias, referee the odds were always against Barnsdales. Trailing 2-1 BFC pressed for an equaliser and in doing so conceded two quick fire goals late on, handing their opponents a flattering 4-1 win.

Heading into the final game against Stewarts Law, Barnsdales were determined to not finish bottom and it showed. BFC were positive from the start and were 3-0 up within 5 minutes. Once comfortable, Barnsdales stroked the ball around confidently and had a handful of chances to increase their lead. Barnsdales added a fourth before Stewarts Law gave a brief comeback scoring two goals in quick succession. The 4-2 result, secured a third place finish and a first win for Barnsdales FC since forming.

With the first win under their belts, Barnsdales will no doubt be looking to use it as a springboard to build upon in future competitions. The return to form of front man Ryan Dunphy will be welcomed by fans and players alike. Fans will be looking to chairman, Jason Barnsdale, for further investment in the squad and will be excited to see the signings that may be lined up in the pipeline. 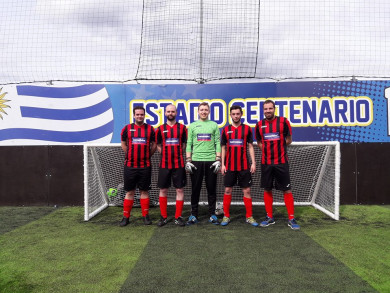