Blue Anchor, owners of West Moor Park East, a 195-acre employment site off junction 4 of the M18 in Doncaster, has announced a partnership with commercial property developers, Litton Buccleuch.

The announcement reinforces Blue Anchor’s commitment to delivering the site – and an estimated 4,000 jobs – as quickly as possible. A planning application is currently lodged with Doncaster Council.

Litton is an established and experienced commercial and mixed-use developer and investor. Buccleuch Property is the privately owned commercial property arm of Buccleuch Estates and is focused on all aspects of appropriate land use. It works nationally on its own projects as well as regionally with joint venture partners.

Development of the site would also complement public investment in the A630 West Moor Link dualling scheme, with works on this infrastructure well underway. This Council-led scheme has been supported by the Sheffield City Region and is intended to enable investment in new developments that create new jobs and homes. The proposals for West Moor Park East will help to deliver on these aims.

Jonathan Moses, a director of Blue Anchor Leisure, said: “We’ve been firmly committed to delivering this investment in Doncaster for some time now, and today’s announcement adds established names from the development industry who will assist us in swift delivery and bring a strong track record of success.

“We have always stressed the deliverability of this site which is in a perfect location close to existing commercial development and the transport network. A planning application is in with Doncaster Council and is progressing well. We are hopeful of a decision soon.”

A spokesman for Litton Buccleuch said: “We have been interested in this highly strategic site for some time and are delighted to have now entered into an Agreement with Blue Anchor. We believe there is a compelling case for development on the site and a strategic shortage of land locally, regionally and nationally.

“It links well with the airport and Motorway network and existing employment schemes. We have already received expressions of interest from end uses. We will shortly make further announcements after meeting with our agents and professional team.”

Blue Anchor Leisure has a long-established track record of bringing development land to the marketplace in Doncaster. These include 400 acres of land adjoining Doncaster Airport and 200 acres of land at West Moor Park, which has already seen the development of the Next distribution centre.

Doncaster-headquartered Barnsdales acted for Blue Anchor. CPP, Sheffield and Barnsdales are appointed agents for the scheme. 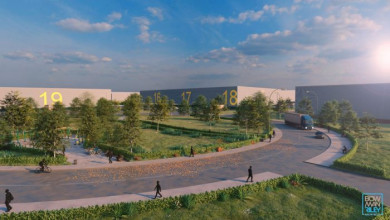