Major employment site could create 3,500 jobs  - with businesses ready to sign up

A major employment site is being put forward in Doncaster that could create up to 3,500 high value industrial jobs.

It is already attracting major interest from businesses that wish to locate there and the owners are urging the Council to include it in the emerging Local Plan as it offers more benefits and less constraints than the other major employment sites currently earmarked for inclusion in the Plan.

The proposal is currently an ‘option’ in the emerging Local Plan but the developers are pushing it to be allocated in the next stage of the Plan so it can be delivered as quickly as possible.

Blue Anchor Leisure is promoting the 195-acre development site in Armthorpe called West Moor Park East.  It sits alongside the M18, with strategic transport links, and is located next to the Next Distribution centre, offering a unique opportunity to drive economic development in the area.

Jonathan Moses, a Director of Blue Anchor Leisure commented: “We firmly believe that this site will drive economic development in Doncaster and will create well paid jobs for local people and so should be in the Local Plan. Coming from Doncaster, I want to bring back manufacturing jobs and businesses to the area, building on its rich industrial heritage.

“It is in single ownership, has definite interest from major developers already and is strategically located for key transport links.

“If this site is allocated in the Local Plan, work could start within 12 months and it could be fully completed in five years.”

“Unlike other sites earmarked for allocation, West Moor Park East will focus on high end industrial jobs, rather than limited amounts of logistic jobs.

“We hope the Council grasps the opportunity and allocates this, along with the other sites, to increase the range and choice of employment opportunities in the area, which will help Doncaster thrive in future years.”

The site has an existing planning permission for major motorsport and leisure uses and has been partially developed with buildings, roads, hard surfaces and earth features.

Blue Anchor Leisure has a long-established track record of bringing development land to the marketplace in Doncaster. These include 400 acres of land adjoining Doncaster Airport and 200 acres of land at West Moor Park, which has already seen the development of the Next distribution centre.

The draft Local Plan is expected to be published by the Council in March, which will then be subject to further consultation before being examined by a Government Planning Inspector.

Commercial enquiries for interested businesses are being handled by Barnsdales Chartered Surveyors and Property Consultants. 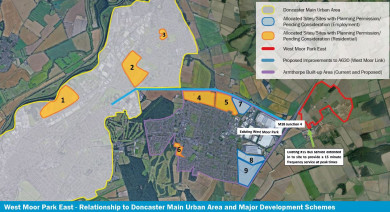