A business park at South Yorkshire’s expanding international airport is now close to capacity after a rush of arrivals by businesses and investors.

All 22 office units at Fountain Court, next to Doncaster Sheffield Airport, have been sold, with availability now limited to properties which have been bought to let.

One investor, Sheffield-based retail and shop fitting specialist Matt Squire, arrived at Fountain Court with a view to carrying out some work on one of the units. Instead he bought one.
Matt said: “I could see for myself it was a great scheme in a great location so we bought one of the units to add to the portfolio of properties that we rent out. It’s the first site that we have bought outside Sheffield, and Barnsdales are now marketing it for us,
“We were attracted by the quality of the scheme and the fact that it’s very close to the airport. As project managers, we do a lot of work in London and other areas of the country, and when you compare the prices at Fountain Court with those elsewhere you see it’s a great opportunity.”

Fountain Court was developed by Leeds-based Prospect Property Group and built to a high specification as a result of the investment of almost £2.5 million from the European Regional Development Fund (ERDF).
Craig Gooddy, an associate in the commercial agency team at Barnsdales, said the firm concluded deals on 14 of the units, which were disposed of over a period of about 18 months.
He said: “Almost all of them have been taken by owner-occupiers, which demonstrates the appetite for people to own their own premises. The fact that two have been bought to let indicates the level of confidence investors have in the site.”
Business owners who have moved to Fountain Court share the confidence and are building their own community.

Jojo Brown, Director of Anderson & Brown, added: “There has been a bit of networking between the businesses here and we’re hoping to do more of that because it will be more beneficial if we can get more people involved.”

Claire Foster, Managing Director of Revive Business Recovery, added: “We wanted to have our own space rather than serviced offices and we liked this location because we operate nationally and it’s easy to connect with the new road.”

Paul Gregory, Managing Director of Talk to Media Ltd, said: “We moved to Fountain Court in December 2016 and it’s the best decision we have ever made for the company. Now that all the pods have been bought or let there is a fantastic atmosphere, and we have all created a very supportive business community.”
Chris Dungworth, Investment Manager for Business Doncaster, added: “We’re delighted that this speculative scheme has proven so successful and attracted both indigenous businesses and inward investors. Business Doncaster has supported the project since its inception and looks forward to welcoming new tenants to the ever expanding Doncaster Sheffield Airport Business Park.” 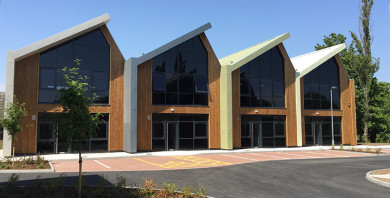