COVID-19 will change the way we use offices forever

By Spencer Gower of Barnsdales in Cirencester

Right now, office workers are beavering away in their spare bedrooms or on kitchen tables up and down the country, but from now on, their employers are allowed to ask them to return to the office.

The question is; will they want to come back, and will employers really want them there?

After months of working remotely during the lockdown, I’m sure we’ve all developed a sort of love-hate relationship with the new way of working. Some will be itching to return to normality, but others will have discovered the freedom that remote working can bring.

Many organisations are now considering what their long-term solution might be. With restrictions on our daily life expected to last for months to come, if not longer, business leaders will be evaluating whether to continue remote working indefinitely, to gear up for a return to the office, or to strike a balance somewhere between the two.

While there is lots of uncertainty and no distinct path forward, there is one thing that I think is clear: the way in which companies use office space in future will be entirely different to the way things were before the pandemic.

The evolution of the office

My career in property began in the 1990s and I’ve been involved in property management and the development of retail and office environments for many years.

Back when I started, offices were very different to the way we think of them today. In the late 90s, many workplaces and their workers were divided into cubicles.

Designed to help people concentrate and make calls more comfortably, cubicles were also rather isolating and they were an inefficient use of space, which drove up prices. Cubicles also became quite difficult to work in: Within each cubicle, workers would battle for room against stacks of paperwork and the chunky white computer towers and CRT monitors they needed alongside older technologies.

In the 2000s, this need for space led the way toward more open-plan layouts which encouraged teamwork and collaboration and this helped to make office environments far more sociable. The cubicle walls were pulled down and spaces where team members working side by side or opposite one another on large desks became a characteristic of almost every office.

Soon after, the open plan office continued to adapt when, as a result of improved performance of laptops and the launch of more manageable intranet systems, hot-desking started to become the preferred option for many organisations.

From an employer’s perspective, hot-desking was extremely efficient; with shared workspaces, companies could accomplish far more in much less space. The desks and cubicles which would sit empty and unused for hours or days on end were replaced with long tables with multiple shared computers or spaces for laptops to be plugged in.

More recently, co-working spaces have become popular, supported by ever more mobile technology. With break-out spaces that allow teams to meet and for individuals to enjoy a change of scenery, co-working spaces allowed workers a far greater degree of freedom and flexibility than the more traditional working spaces.

However, it seems to me that we’re now at the beginning of a new era for office space as we move on from the coronavirus lockdown. But what will the new office look like?

The end of hot-desking

With the risk of coronavirus appearing to be a long-term problem and with workers now being far more aware of hygiene and the need of cleanliness, hot-desking may now be a thing of the past and co-working spaces are no longer quite so attractive.

It’s been widely known for many years that desks and computers, particularly keyboards, build up germs and dirt and when these are used by multiple people, germs spread quickly. While many offices recognised this as an issue before, it’s now become a fundamental problem with the arrival of COVID-19.

It’s not just hot-desking which will be affected; any environment in which people work in close proximity to one another has to be reconsidered, challenging every type of office layout which has dominated the last twenty to thirty years.

Until August, the government advice has been to work from home if you can, but to allow essential work to continue in offices, companies have had to make some significant changes. Now that employers will soon be able to ask employees to return to the workplace for non-essential work, more offices are adapting to become COVID-secure.

So how are office managers making their workplaces safe?

The government has published a long list of steps which should be taken to protect office workers by supporting social distancing and improving hygiene to prevent the spread of illnesses such as coronavirus.

Now, for offices to reopen safely, workers must sit at at least two metres apart (or one metre with additional protection such as face masks), workers shouldn’t be positioned to be facing one another, windows should be kept open and cleanliness is to be a priority. As well as this, tea rounds are banned, air conditioning is turned off and hand washing should be frequent and thorough.

At a property I manage; Cirencester Office Park, I’ve followed each of these steps and it has changed the environment in many ways: Here, we’ve installed hand sanitiser pumps beside doors, placed two-metre markings on floors, set up keep-left signs and one-way systems and I’m working closely with tenants to help them make their own spaces more secure in line with the government advice. We’re also having the communal spaces more frequent deep-cleaned and we’re encouraging more thorough hand washing practices among workers.

But despite these steps having been made at offices across the country, the relationship between workers and their workplace has changed.

Research by the Centre for Economics and Business Research (CEBR) has found that 32% of UK office workers are expecting to at least partially work from home even after the lockdown has ended. Meanwhile, another survey has shown that only 21% of office workers have returned to their desks so far and just 58% expect to be back by September. 19% don’t expect to be back by 2021 at the earliest.

One of the main reasons for this is because eight out of 10 office workers say they won’t feel safe in an office space. That sense of insecurity is crucial and with the decline in the number of cases of coronavirus in the UK having slowed in recent weeks, it may be a long time before that changes.

It’s easy to see why people are concerned: An investigation by South Korea’s Centers for Disease Control identified that within just 16 days, 94 people working on one floor of a call centre contracted coronavirus early in the pandemic Meanwhile, research published in March by MIT in the US found that one sneeze can blast potentially infectious droplets up to 27 feet.

For me, the problem we need to solve is; how can we make offices safe and make office workers feel safe? And I think the answer requires a root-and-branch reorganisation of how companies use office space.

Responding to the new normal

Before the pandemic, the idea of remote working was something most firms were only tentatively exploring. Often, it was the domain of startups, small tech firms and microbusinesses which couldn’t necessarily afford to have a permanent office or had never felt the need to have one.

But, as a result of the pandemic, we’re all far more accustomed to remote working and working from home. Just a few months ago, video conferencing, web chat and cloud storage were new and exciting systems, but now they’re essential and the technology has seen an incredible uptake in usage.

In December 2019, for instance, Zoom had just 10 million meeting participants per day. In April, that figure had grown to 300 million.

Remote working and flexible working has been a real discovery for many companies which have realised that it’s not only possible; it’s affordable, productive and it can help people maintain a far better work/life balance.

Meanwhile, many larger companies are finding that it would be impossible for them to reopen to all of their workforce as they did before. It’s been reported that Goldman Sachs for example is to cap the number of people allowed into its offices to 30-40% of its workforce to allow them to maintain the required 1m+ social distancing. Meanwhile, it’s been calculated that if London’s skyscraper office blocks were to reopen, the socially distanced queues for the lift would be more than a mile long.

Now, companies such as Amazon and Google are allowing their UK office staff to work from home into the New Year and many smaller companies are doing the same.

The offices of the future

Since the lockdown began back in March, some have asked me whether this is all terrible news for landlords, property managers and office owners. Honestly, the answer is no.

While you might expect the crisis to have stopped companies wanting to invest in offices and support home working instead, but I’m confident that this will be countered by the huge need for space.

Just as companies found during the lockdown, there was still essential work which needed to take place in their office, and while video conferencing has a great deal of uses, there’s still nothing like meeting in person, particularly for staff training, sensitive discussions or brainstorming and creativity sessions.

Anyone looking to grab a bargain on office space might therefore be disappointed. In many ways, this will turn back the clock to the days before offices could house large teams in relatively small spaces and when property costs were still high. I suspect that, once we get used to the “new normal” and the economy recovers, office space will still be in just as high demand as before.

As I write, I’m sitting at my desk at Cirencester Office Park. My desk now faces the wall, every other desk is more than two metres away but I’m still enjoying the conversation with my colleagues. The air conditioning is off and the windows and doors are open. The tea round is a thing of the past so we’re each getting up from our desks more often to get a drink. Today, I’m in the office, but tomorrow, I’ll work from home, before returning to the office at the end of the week.

It’s actually very pleasant and I think there are lots of reasons for this new way of working to outlive even the threat of coronavirus. The office may have to change as a result of COVID-19, but it’s certainly not going the way of the cubicle.

Spencer Gower is based at Barnsdales Cirencester office. Barnsdales manages a wide range of properties in the Gloucestershire area and is also property manager of Cirencester Office Park and Bishops Walk Shopping Centre in Cirencester. 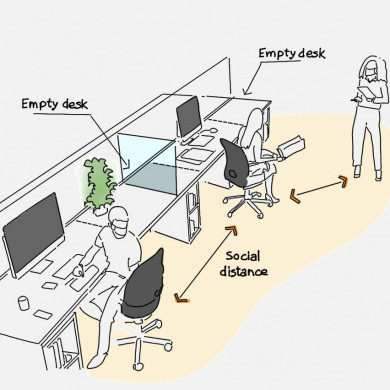