The new owner of a stately home and estate dating back more than 350 years has confirmed plans to invest in facilities for business and in expanding the thriving leisure and hospitality services.

Jonathan Pass, Director of Kelham Hall Limited, completed the £4 million purchase of Kelham Hall, near Newark, in December 2017. He has now embarked on adding a 40-bed hotel and restaurant and has instructed Barnsdales chartered surveyors to market the serviced offices, which offer up to 60,000 square feet of high quality space.

Jonathan said: “We have gone from strength to strength. People are beginning to realise that Kelham Hall is no longer council-owned, is open for business and provides opportunities for companies to launch, invest and expand.”

Jonathan revealed that it was curiosity which first attracted him through the gates of the 44-acre estate which sits on the banks of the River Trent and dates back to the 17th century. After fire destroyed the first hall in 1730 and the second in 1857, the current building was designed and built in 1863 by Sir George Gilbert Scott, who the next decade completed St Pancras Station in London.

Jonathan said: “It was about six years ago when I drove up to Kelham Hall and fell in love with the place. It was owned and occupied by Newark and Sherwood District Council and about a year later they invited expressions of interest. We were the first through the door!”

Initially he agreed a lease to take over the function business at the Hall and increased turnover four-fold. After the Council decided to move out, Jonathan completed the acquisition and secured planning permission for the new facilities.

Jonathan said: “We are looking at various options for the property. Within the estate we already have caravan and camping facilities with 24 fishing pegs and we will be adding a stunning hotel with fine dining within the existing building.

“The business centre offers large and small serviced offices over four floors. It’s a very flexible configuration and a lot of rooms have connecting doors.

“We have everything from a pet food wholesaler, escape rooms, various outward-bound businesses and a payroll bureau to date. We are also talking to some larger companies which are interested in taking a floor. It’s great for everything from small businesses to a corporate headquarters.

“It’s a rural environment with plenty of car parking, steeped in history but with modern, high-tech IT infrastructure and security including CCTV. Arriving down the driveway gives you an instant wow factor!”

Barnsdales, which operates nationally from offices across the north and the midlands, was appointed after being approached to provide strategic advice on development options for Kelham Hall and the estate.

Emily Hanlon, a Commercial Agency Surveyor with the firm, said: “We have already brought one new tenant into the business centre and we expect to agree another letting soon with a sizeable organisation. We also have more interest in the pipeline and we continue to explore the opportunities for further direct and possibly partnership investment.

“The property offers many benefits, not least the location so close to Newark with its frequent and fast trains direct to London, but not surprisingly people are particularly impressed with the remarkable working environment and the quality of the facilities.

“Business tenants have free access to the gym, meeting rooms and to the high-quality catering, and the rents are lower than in the big cities in the area. There is nothing comparable in the region and we know from the enquiries we have already received that businesses are prepared to relocate from elsewhere.”

For full details of Kelham Hall and the estate visit www.kelham-businesscentre.com 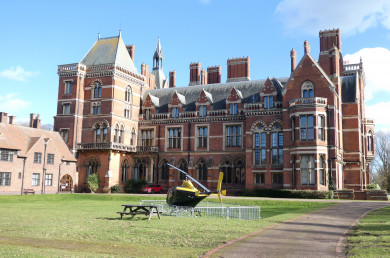